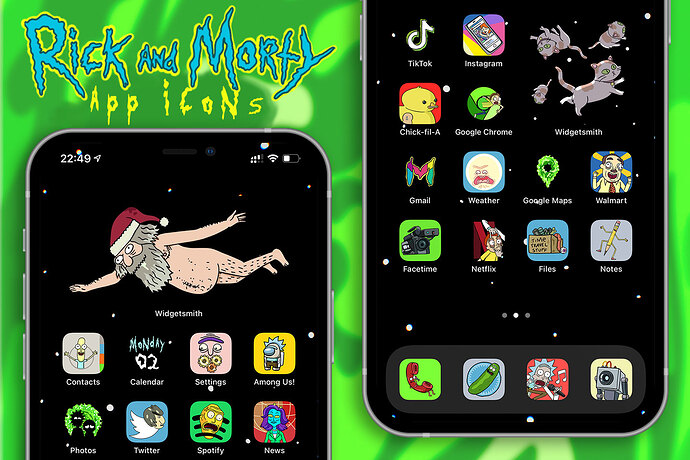 Write here what icons you would like to add to this pack.

Link to the Rick and Morty App Icons Pack.

It’s an absolutely great pack that has already gone above and beyond but in case you decide to make improvement I’d like to make some suggestions.

I don’t have half the apps in your screenshot but had so much fun getting creative and doing my own this with them. I don’t think all the icons NEED to be related to a certain app. Add some random cool looking ones! A Mr.Meeseeks, squanchy, Ricks toilet, some random screenshots of different characters doing random things or even just the places! Things that people can use for any app and it’ll still make sense to them because they chose them.

Other than completely random icons maybe make some that work for a group of apps but not specified to just one.
I would have loved to have something like the school Rick and Beth made for “Ricks kids” or the citadel or Mortys school to use for my university app.
So things like one of the anime characters from the GoTron episode for crunchyroll or any anime app, Rick’s flies on the table or his safe’s number pad for password managers/private apps, Rick injecting Morty (either in the mega fruit episode where he broke his leg or in the madman episode where he gave him the buff arm) for proof of vaccine apps, something for clothes shopping apps etc.

The examples I gave were more for inspiration rather then specific requests.

You made an absolutely amazing pack! This post isn’t me saying your pack is lacking anything, just some food for thought if you do decide to expand it. Thanks for making our phones more personalised and something we can show off!

Wow) Thanks for the feedback and for your ideas.

I’ll definitely add these icons to the Rick and Morty set.

Only it will be later, I now have three packs of icons in work, as soon as I finish them I can take up the upgrade of this one

Hey, we have a long-awaited update with 27 new icons!

Listen to me, Morty

New icons you will find in the ZIP archive, use the “Download Icons” button.